Secretary of the Interior Zinke, in a last minute turnabout did not want to hear what Mesquite and Moapa residents had to say about our national treasures. Zinke is currently facing a firestorm for attempting to pressure Senator Lisa Murkowski to vote for the dismantling of health care for millions of Americans. A white house in turmoil and intensifying miscommunication and misdirection and continuing policy uncertainties may also have a lot to do with not showing a public face and a team in total disarray.

On the other hand, the Nevada state assembly democrats showed up on Saturday July 29, 2017 and proudly discussed their accomplishments during the 2017 Nevada legislative session. An audience of about 100 showed up to discuss those accomplishments and expressed their gratitude and their continued support for the issues that the legislators intended to continue to pursue on their behalf. Audience comments resoundingly applauded their leadership role during the 2017 session and encouraged their continuing legislative work on the behalf of the Nevadans.

The legislators unanimously took an ownership role for education and healthcare. Speaker Jason Frieson pointed out that some inroads for better healthcare and adequate education funding were made in the 2017 session. 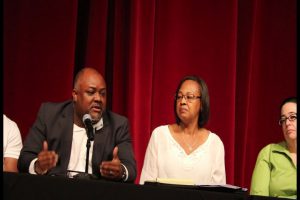 Everyone on the democratic side of the legislative aisle is fully committed to appropriate future legislation and budgetary support for these important matters to all Nevadans.

In a matter that is of utmost importance to Virgin Valley Water District, Assembly representative Heidi Swank indicated that she will be taking a very active role in the state’s understanding of its water resources and determination of future legislative action to assure a clear and consistent water management policy for the state of Nevada. 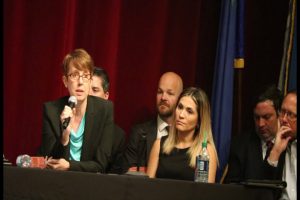 further indicated that their role in actively pursuing input from all citizen (unlike Zinke’s brief appearance in Bunkerville) will continue to form the basis for the protected status of our Nevada treasures and support for the recent Gold Butte National Monument designation.

A fresh Brees wafts through the NFL and Goodell joins in in by a definitive anti fascism change of direction. Also joining in with anti fascism sentiment are “America Strong” republicans. Four star generals John Kelly and Jim Mattis who personally witnessed this erosion of American values and the decline of functioning institutions that upheld the principles of freedom, liberty, equality and justice for all Americans, voiced serious concerns and issued strong warnings about the current regime and their attempts to hijack America and stir the winds of fear, hate and division to reestablish a fascist world.

Nevada Congressman Horsford and Nevada State Treasurer Zach Conine provide helpful information on coping with rental and mortgage payments during this crisis. Help from the state is being offered. Listen to these important messages.

COVID19 by the numbers!